Jenny and Sherry Thompson for the History News Network
February 4, 2018

Llewellyn Thompson died forty-six years ago, on February 6, 1972, shortly after his retirement at the age of 68. He was one of the most critical players in the Cold War, engaging directly with Soviet rulers abroad and exerting great influence with both Republican and Democratic presidents in their interactions with the Soviet Union. Thompson´s quiet diplomacy won him the unusual distinction of being branded both a Hawk and Dove, earning the label of Cold War Owl from British correspondent Henry Brandon.

Three times posted to the Soviet Union, twice as Ambassador, Thompson experienced life there during periods of the greatest tension, from the time when German artillery shells fell on Moscow during the Second World War, to the downing of the U-2 spy plane, and confrontations and negotiations with Soviet Premier Nikita Khrushchev and his successors in the postwar period. Thompson’s service extended through almost the entire Cold War, including roles in the formulation of the Truman doctrine, the negotiations that freed Austria from occupation, the intractable Berlin Crisis, and the start of the Strategic Arms Limitation talks (SALT).

And yet for many well informed readers of history his name rarely resonates. Why is he so often skimmed over in the historical accounts of these events? One historian challenged Dean Rusk and Robert McNamara’s assertion that Thompson was the unsung hero of the Cuban Missile Crisis. Why, he asked, did the written record not reflect this? For one, he left little documentary evidence of himself and never wrote a memoir. He said it was impossible to tell the whole truth without causing damage to certain people personally, which he did not want to do, and it would compromise diplomatic work. People would not be willing to be sincere with diplomats in the fear that they might appear in their memoirs one day. He also cautioned against the written record, saying many of the important deliberations would not be found there.

Thompson’s is an archetypal American story that took him from the wilds of the American West at the beginning of the 20th century to inside the halls of the White House and behind the walls of the Kremlin. His was a time when character meant more than personality. Thompson’s story also confirms the power of personal diplomacy, patience and cultivation of deep understanding of and empathy for the other.

Thompson’s forthrightness and wartime experience in Moscow helped him develop a unique relationship with Khrushchev. This allowed him to correctly anticipate Khrushchev’s reactions during the Cuban Missile Crisis, which made Thompson more than just another man around the table. As Dean Rusk remarked, it made him “our Russian in the Room,” and in Robert Kennedy’s opinion, the most useful advisor to President Kennedy during the crisis.

In dealing with the Soviets, Thompson saw two principal approaches – one negative, the other positive. The negative approach was reactive and defensive against the Soviet bloc threat. Thompson was personally convinced communist ideology was wrong and its goals unattainable. This is why he believed the second of the two approaches, “Namely the strengthening of the institutions and relationships of the free world” was the better strategic course. The United States, he thought, should strive to live up to its professed ideals and to create the kind of society that represented the desired alternative to communism.

In a speech in the 1960’s, he talked about his wonder at the many technological advances he foresaw, but worried that we were not preparing for their long-term consequences, particularly to labor. He saw that conflicts of his day as primarily east-west, but despaired that we were ignoring the building conflicts of “tomorrow” which he believed would be north-south for reasons of economics and resources. Under Lyndon Johnson, he tried to promote the idea that the US and the USSR could work in tandem to help ameliorate the north-south divide. Unfortunately, the Vietnam War stymied that effort.

As new challenges arise it is tempting to imagine our father’s approach to a policy of “America First.” With history as a guide, it seems likely that he would have chosen the “positive” approach. He would have counseled that we try to be an example of how to behave as a nation-state with an ethos worthy of its ideals. Not as hawks or as doves, but as owls, pursuing avenues of mutual benefit rather than short-lived one-upmanship.

One has the feeling that the world today needs more Owls. We trust that there are those in government and other institutions today, quietly laboring to promote positive goals, and hope that we can muster the collective foresight and leadership to support them in their efforts. 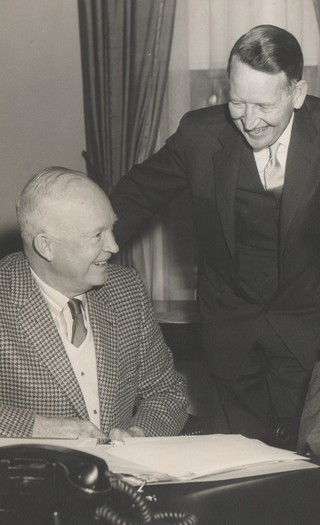 Thompson with President Dwight D. Eisenhower after the signing of the Austrian State Treaty, 1956 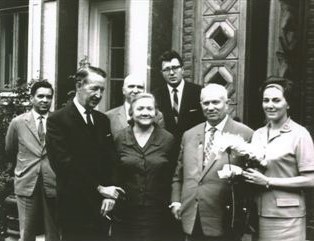