The Life and Work of a Moscow Pro

Reviewed by Jonathan B. Rickert

Retired Senior Foreign Service Officer Jonathan B. Rickert spent the majority of his 35-year career in or dealing with Central and Eastern Europe. His final two overseas posts were as deputy chief mission in Sofia and then Bucharest. He served as Ambassador Llewellyn Thompson’s staff aide at Embassy Moscow from 1967 to 1968.


Winston Churchill famously called Russia “a riddle wrapped in a mystery inside an enigma.” Those words could also apply, at least to some extent, to Llewellyn E. Thompson Jr., a career diplomat and arguably the preeminent American Kremlinologist of the mid-20th century. A two-time ambassador to Moscow, Thompson eschewed the spotlight and never wrote a memoir; nor is he the subject of any other book-length biography. He could be self-effacing to the point of near invisibility— he was no ego-driven, self-promoter.

Thus the task of bringing the details of his life and distinguished career to public attention has fallen to his daughters, Jenny and Sherry Thompson. Though neither is a professional historian, they spent more than 15 years scouring official archives and family papers and interviewing scores of people on both sides of the Atlantic who knew or worked with their father to produce a thorough, vivid and compelling picture of the man and his career. In the process, they helped fill crucial gaps in our understanding of Cold War diplomacy.

Llewellyn “Tommy” Thompson (1904-1972) was born and raised in Las Animas, a flyspeck of a community in southeastern Colorado. At loose ends after graduating with a degree in economics from the University of Colorado, he met by chance with a retired U.S. consular officer who encouraged him to consider a Foreign Service career. Thompson subsequently moved to Washington and joined the Foreign Service in 1929.

After postings to Ceylon and Geneva, he returned to Washington, D.C., before heading to Moscow in 1939, where he was to spend 10 years during his career and where Soviet affairs became the focus of his professional life. His experiences in wartime Moscow gave him a feel for the country and respect for ordinary Russians, as well as a deep understanding for the inner workings of the regime.

The authors describe in detail the arc of their father’s career, intertwining it with scenes from his personal life, including tales of family vacations that weren’t, household effects that ended up at the bottom of the New York harbor, schooling and health issues, etc. Among many professional high points for Thompson, three stand out. second

The first was his role in achieving the 1954 Trieste Agreement, and the second was his participation in the 1955 Austrian State Treaty, both while he was serving as high commissioner/ambassador to Austria. Although the conclusion of a multilateral negotiation can never be attributed solely to one person, the successful completion of these two groundbreaking agreements undoubtedly was due largely to Thompson’s negotiating skills. Among them were patience, discretion, honesty and a keen understanding of the other side’s point of view and political needs—he never took a zero-sum approach to negotiating.

Trilateral negotiations took place among the United States, United Kingdom (as occupying powers) and Yugoslavia on the disputed city of Trieste and adjoining territory. In essence, the task was to convince both the Italians and Yugoslavs that their interests were being addressed fairly. That neither side was entirely happy with the outcome probably suggests that it met that Solomonic test. Of all his diplomatic achievements, Thompson recalled Trieste with the greatest satisfaction.

The Austrian State Treaty negotiations, with four participating powers, were even more daunting. At stake were the end of the Allied occupation and return of Austrian autonomy, in exchange for that country’s neutrality. All concerned had come to the point of agreeing to the return of Austrian sovereignty, but as always the devil was in the details, with the Soviets holding out for various advantages.

Through a combination of creative proposals and some audacious bluffing, Thompson was able to nudge the negotiations toward a successful conclusion. As a result, the Soviets for the first time actually departed from foreign territory that they were occupying.

Thompson’s most important diplomatic contribution, and perhaps the most difficult one to document, was his role as President John F. Kennedy’s chief adviser on Khrushchev and the Soviets during the Cuban missile crisis. Thompson had come to know the Soviet leader well during his first tour as ambassador in Moscow (1957-1962), and he deployed that knowledge effectively in urging Kennedy to answer the first (and ignore the second) of Khrushchev’s famous letters.

He also undercut the arguments of those who were advising an all-out military response. Thompson believed that a cornered animal is the most dangerous, and that without compromising on principle, one should always leave an opponent a graceful way out. Secretary of State Dean Rusk summed up Thompson’s role most succinctly when he called him “the unsung hero of the Cuban missile crisis.”

The pall of Vietnam clouded Thompson’s last years before retirement, rendering progress with the Soviets on nuclear disarmament and other issues difficult to impossible. While Thompson did not actively oppose Lyndon Johnson’s Vietnam policies, they made him uneasy and were, he came to believe, doomed to failure.

In addition to being a biography, the book serves as a description and explanation of the importance of professional diplomacy, practiced by those who possess area expertise, cultural awareness, balance, empathy and the ability to present and defend their country’s interests in a civilized manner. Thompson exemplified those qualities, communicating directly with leaders both at home and abroad, providing insights, analysis and policy recommendations that usually were on the mark.

The book is also an extended tribute to the authors’ father and his career. Fluidly written, the narrative is rich in family history and personal anecdotes. One wishes that the authors had been given access to Soviet security services archives and that the CIA had been responsive to their Freedom of Information Act requests, but the story stands up well even without that material. Ambassador Thompson would have been proud of the skill, thoroughness and evenhandedness with which his daughters compiled this biography. 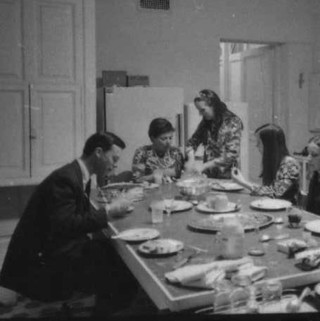 Family Sunday dinner in the kitchen at Spaso House in Moscow with Jonathan Rickert, Jane Thompson and the Kremlinologist authors